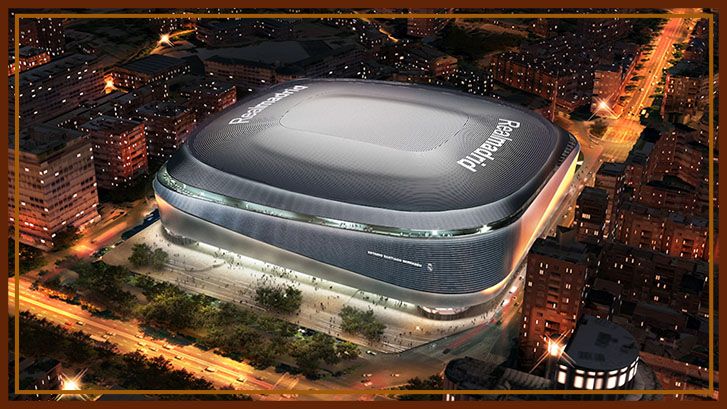 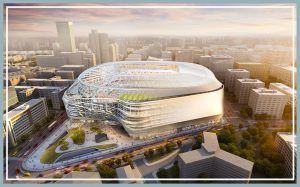 The New Santiago Bernabéu is a project that has been in the making for the past 7 years.

The president of Real Madrid FC, Florentino Pérez, began accepting proposals since 2012 and the dream of having a New Santiago Bernabéu, has finally come true.

Last April, Florentino Pérez along with the Mayor of Madrid presented the project for the renovation of the Santiago Bernabéu Stadium that will begin in the summer of 2019 and it is estimated to be completed in the year 2023.

News that have cheered the whole Madridista fan base, as it will be one of the best stadiums in the world.

Since the Santiago Bernabéu is located in the middle of the city, its remodeling has presented a great challenge due to the restrictions of free space for its expansion.

The reform of the Real Madrid house, has been designed by the group of architects GMP / L35 / RIBAS, with the current market needs in mind.

We will see an update on the experience that the visitor will have with the facilities, which promote a personal interaction within the new spaces.

Real Madrid FC has been able to achieve an investment that exceeds 575 million euros.

The New Santiago Bernabéu will have commercial and social areas that will offer alternatives for leisure, social interaction and business exchange. 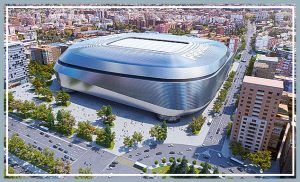 After renovations, the Santiago Bernabéu will have a new space of 66,700 square meters, which includes new urban areas and gardens.

Only 20,000 square meters will correspond to a new square in the Paseo de la Castellana, where Rafael Salgado street will become pedestrian. As well as another 5,500 square meters of gardens that will replace the shopping center La Esquina del Bernabéu.

The Santiago Bernabéu will have some 3,000 new locations thanks to a change over the third amphitheater on the east side.

It will have a change of appearance with the demolition of two towers, placing the supports where the new deck will go and will gain 12 meters in height.

Its exterior appearance will be one of the biggest novelties, a variable lighting system, on the same line as the Allianz Arena in Munich.

The next phase will be the placement of a radial structure that covers the entire façade.

It will also feature a 360º video marker, “one of the emblems of the new stadium”.

As for the technological aspect, which will represent an investment of 100 million euros, the placement of a new translucent stainless steel shell that will cover the stadium is planned, which will feature a new LED lighting system that could be offered in different colors on the outside, until it becomes a screen to show videos or text.

A construction of a metal enclosure of all exterior that culminates with a retractable cover, which will take 15 minutes to open. 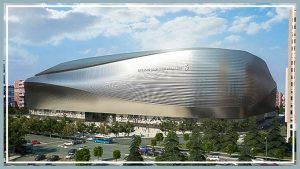 According to the plans, the remodeling of Santiago Bernabéu Stadium will be done in several facets:

The Santiago Bernabéu will grow 12 meters and will be 57 meters high, will debut 3,000 new seats for a total capacity of 82,000 spectators.

The current Tour of the Bernabéu will also be expanded and a new interactive museum will be opened.

A brand new shopping area with restaurants, shops and even an entertainment center with virtual reality stations and Esports.

This remodeling also includes two new towers and access ramps to meet the needs of people with disabilities. 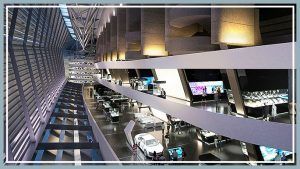 Among the new facilities that can be enjoyed in the new Santiago Bernabéu, we can count: 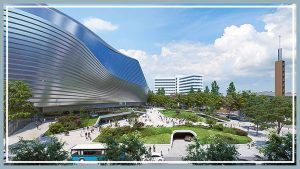 The improvements in accessibility and comfort are additional benefits that the city will have with the remodeling of the Santiago Bernabéu.

The construction of two public spaces will be developed, one on the Castellana side and another where the La Esquina shopping center is located.

Everything that has to do with the maintenance of these spaces will be handled by the Real Madrid FC itself.

Also, it will have a construction of a large atrium on the side of Castellana, with a height of 21 meters that will be a future visual reference of the stadium, as well as the adaptation of the rest of the doors and corridors, they will help a better and faster distribution to the assistants for the stadium.

Another part of the project includes the construction of up to 20 new entrances is planned and the architectural barriers will be eliminated, which will allow a better evacuation in case of emergency.

Improvements in comfort. All the chairs will be updated with a width of 55 cm, unlike the current 45 cm, making it possible to watch a live football game with the greatest comfort.

1,000 locations are planned for people with reduced mobility. Heating is maintained throughout the stadium and a new ventilation system will be implemented. 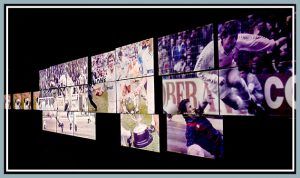 The Tour of the Bernabéu was opened to the public on May 20, 1999, just one year after Real Madrid won the Champions League

Since its opening, it has been visited by more than 15 million people from all over the world.

Did you know that the Tour of the Bernabéu is the third museum with more affluence of the Spanish capital? Only to be surpassed by the Museo del Prado and the Reina Sofía museum

The evolution of the tour is evident, it has gone from a simple exhibition of trophies to an immersive space.

With audiovisual elements, multitouch technology, a gallery with more than 250 pieces of incalculable historical value.

The tour has added visits to the dressing rooms, the players seats on the field, the VIP areas.

The opportunity of photographs with the Champions League cup, as well as a photomontage with your favorite player.

A new venue for Esports. 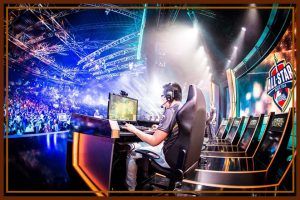 The New Santiago Bernabéu will have spaces for the realization of Esports competitions.

Being this one of the markets with more growth at world-wide level, it will be a spectacle to attend competitions of Esports Leagues.

League of Legends, Dota 2, Overwatch and the newest Battle Royale that includes super popular titles like Fornite, PUBG and ApexLegends are amongst the most famous.

This will be a very successful addition to the Santiago Bernabéu, since the video game industry exceeds the film and music industry in terms of profits, generating more than a 140 billion dollars a year, the unstoppable scene of video games will have a house in Madrid.

Epsorts venues will have very positive consequences for the economy of the city by hosting Esports tournaments.

Did you know that France is looking to include Esports in the next Olympic Games?  Without a doubt, it is a revolution.

The new face of the Santiago Bernabéu promises endless new possibilities of fun for all of us who live or visit Madrid.

It will be the new center for the best football games, convensions, music concerts and Esports tournaments that will put a new stamp on this much-loved stadium in Madrid.

The renovation of the Santiago Bernabéu will turn it into one of the best in the world where the Real Madrid FC crest will be shown with a spectacular background.

Thanks to Real Madrid and Domain.Me for the images.

Open chat
1
Need help?
Hello, how can we help you?
X
Cookies policyThis page uses cookies and other technologies so that we can improve your experience on our sites: More info